Every month, the top 100 Fleets compete in a Tournament. Each week is its own phase, totaling 4 phases. The final phase being where things get serious. What you win Fleet wise hinges on the number of Stars

you collect. Defeat your division enemies and rack up as many Stars as you can. The top 50 players also win prizes based on the amount of Trophies

Each week during a Tournament is its own phase, totaling 4 phases each month. Phase 1 and 2 are break periods while 3 and 4 are the battle phases, determining placement and reward.

This is a break period. Have a biscuit and chill, nothing is happening right now.

Organize your Fleets and get some last-minute preparations down and about. Enjoy a coffee or some tea while you're at it.

Time to get to work; the Tournament has begun! By the end of week 3, the top 100 Fleets will be placed into 4 Divisions based on the amount of Trophies

they have. Inactive members (>2w Offline) do not contribute their Trophies (Slackers!).

Finish that biscuit and get ready! Finals is what it has all been leading up to. What's the target? Well, that would be the other Fleets in your Division. Defeat their members and earn as many Stars

as possible. Losses won't cost you Stars (Don't worry, it happens), but it will give the enemy Stars.

If you leave your Fleet during finals (Rude!), the Stars gained for that Fleet will stay with them and will not carry over to another Fleet. Any Stars gained after that is fair game though. Leaving/joining during Finals will also net you a severe prize reduction and the inability to claim the 1st place Division A prize.

Well, how do I put this bluntly... Matchmaking is a joke during finals. And by that, I mean it's nonexistent. Maximum priority is given to players worth Stars and little elsewhere. Make friends with the Timeout box, because you'll see it a lot. To make it slightly more bearable, special rules are in place.

First, battling any Fleet member will prevent you from fighting said Fleet again for an hour. Second, only 5 battles every 15 minutes are allowed before a timeout. Third, immunities given to players in Div A and B will be shortened the fewer Star targets there are in matchmaking.

You're cruising in space and blasting Star targets, nice! Obviously, to get the Stars, you have to defeat the enemy. Losing will not cost you Stars, but you won't gain any either. A successful defend or revenge will only net you half the Stars you'd get if you had fought the player normally through matchmaking.

What determines the Stars people are worth? For this we need two formulae. Decimals are truncated for both formulae.

The defender's final Star Value (SV), which an attacker earns for a successful attack, is this:

The same formula when ESV and TSV are resolved:

You also get 6 Bonus Stars per day. They're used up by doubling the Stars gained through successful attacks. Inactive members from Week 3 will not be able to gain Stars during Finals, but they are still worth Stars.

Time to claim the reward for all that hard work. Once Stars

are tallied up, Fleets receive placement based on the number of Stars achieved. The rewards are split equally across all active members. If your Fleet won the elusive 1st place reward, all active members are given the prize. Members are also given pins based on their placement. New members (>1w) only receive a portion of the prize (No #1 Div A Reward), and inactive players won't get anything. 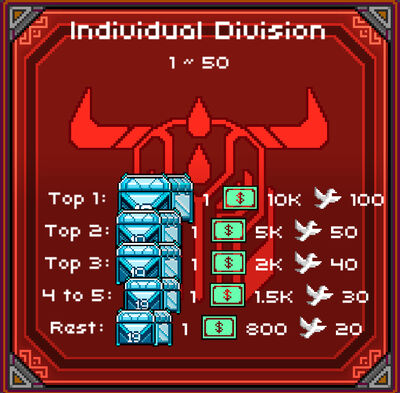 The Top 50 players also get rewarded when Finals ends. Trophies

are used instead of Stars to determine placement. But wait there's more! Once Finals ends, all players above 7,000 Trophies are dropped back to the 7k mark for a fresh start. The top 3 players are also given pins.

Points are awarded to Fleets based on their Finals placements. At the end of December, the points are tallied up and the winning Fleet is given a very special prize. Members of the top 3 Fleets are also given special pins. For 2018, the season winning Fleet, ZAKI龍 were given the ZAKI龍 Blueprint and a real life Pixel Starships cap.

. These can be used in the Dove Store to buy a variety of things. Doves can also be obtained through In-App Purchases.

Certain items may be renamed ??? and replaced with

if the player does not possess enough Doves to purchase them. Certain items are only available to players in certain divisions (Eligibility determined after finals).

Items are highlighted in green (most buy), yellow (Buy after Green), and red (Don't buy). The limit, in addition to being the purchase limit, also takes into account if the item is already owned. Owning an item will count towards its limit, and counterpart items for rooms/items will also count.

Retrieved from "https://pixelstarships.fandom.com/wiki/Tournament?oldid=20702"
Community content is available under CC-BY-SA unless otherwise noted.